A coffee with… Stuart Dobbins

This week we'resitting down and catching up with Stuart Dobbins, our Technical Claims Manager.

Stuart Dobbins joined us a few months ago as a Technical Claims Handler. This week he’s giving us his insight into what’s he loves about his job, what keeps him happy and what he’d change about the industry we work in if he had a magic wand! So grab a cuppa and a biscuit, take a read, and get to know Stuart. 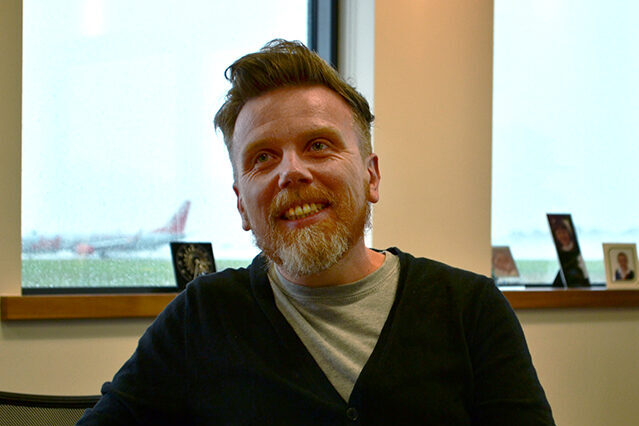 1. How are you enjoying your time at Romero so far?

I’m absolutely loving it. Everyone has been incredibly welcoming and accommodating, and there’s a real team ethos to everything that happens. From very early on it was apparent to me that there are two elements to Romero’s ethos: work hard; and look after people, because they’re working hard!

2. What’s been your favourite thing about being here?

The people. Everyone within my immediate team (and beyond) has been really positive and friendly, and incredibly supportive. If there’s a problem everyone gets involved, either to help or to support the person who’s dealing with it.

3. What have you found most challenging?

Remembering everyone’s names…! I came from a company where I knew everyone and pretty much knew every client. Then on my first day at Romero’s I was suddenly in an environment where I didn’t even know where the paperclips were. It takes a certain amount of time to learn how the company works, how colleagues work, and how clients like things to be done.

4. If you had to sum up your role in one sentence, what would it be?

I make sure that client relationships are maintained from a claims perspective, including regular reviews, oversight of a client’s claims experience and being a point of contact for major losses, whilst handling a portfolio of complex cases and acting as a referral point for colleagues.

5. What has surprised you most about working here?

I think it would have to be the focus on wellbeing. I’ve never really experienced it in previous employment, and it’s very refreshing to see a company which understands not only that there is a human element to work life, but that looking after this element benefits everyone.

My feeling is that insurance has become too bogged down in the two-dimensional, back office, terms-and-conditions side of things. It sounds ridiculous that it has to be said, but insurance has a very real-world element, affecting people’s lives, livelihoods and wellbeing. It is all too easy for someone in a back-office in an insurance company to turn down a claim on a technicality, without understanding that the client is doing their best to get on in their own business and can not be an expert in the minutiae of insurance contracts as well as everything else. I often feel that if insurance companies took a much broader, pragmatic approach to certain claims they would not only save themselves time, money and effort arguing over shadowy technicalities but also generate a huge amount of goodwill with that client. One day I will set up an insurance company that does this and I WILL MAKE MILLIONS.

Wherever I may be, and whatever I’m doing, I hope that I’m happy. Happiness is really the final goal of any human pursuit, so if half of your non-asleep life is at work it seems logical to seek out what you define as happiness while you’re doing it. But also I’d like to be extravagantly rich and own a jet-ski.

It’s clear that nothing less than world-domination is in the company’s sights, and I see no reason why that shouldn’t be the case. There is an unbelievable sense of drive in everyone here and with so many other brokers either being bought out or treating their clients as numbers on a spreadsheet, I think Romero is in an incredibly good position to continue carving out their own unique niche in the market.

9. Where did you work previously, and what did you do?

I used to work for another insurance broker, where I was claims manager.

10. What drives you to succeed?

I have a terrible worry about failure, so more than anything I think the drive to succeed is inherent in that. However I think it’s more than just fear of one’s own personal failure – in this line of work people are relying on you, be it the client, your colleagues or the directorship of the company, and my absolute over-riding drive is not to let people down.

Combining my two favourite things, I would read all morning, and watch football all afternoon. As Camus said: “All that I know most surely about morality and obligations, I owe to football.” I think he had it right.

I think maybe a Breakaway. Doesn’t sing and dance, but it’s always good to have one around. Also, had its heyday in the 90s.

People who mistake belief for fact (there seem to be a lot of them about at the moment). As Bertrand Russell said: “The whole problem with the world is that fools and fanatics are always so certain of themselves, and wiser people so full of doubt.”

15. If you were stranded on a desert island and could take one book, one luxury and one song, what would they be?

The book would have to be the Complete Works of Shakespeare – there’s enough in there to keep me going for a while. The luxury would be my three cats – Freud said that time spent with cats is never wasted, and I would wholeheartedly endorse that opinion. For the song I might have to stretch to Bach’s Goldberg Variations, as played by Glenn Gould – aside from its brilliance and depth, it also makes one’s brain feel a bit like how I imagine my cat feels when I tickle his head.

Thanks for having A Coffee With... us!

If you want to find out more about our brilliant people and how they can help protect your tomorrow, today, get in touch and we’ll talk through what you need.

Back To All News
Next Story: 10 Ways Private Client Insurance will benefit you
Previous Story: Five reasons why you should use an independent broker