Romero Insurance Brokers took the opportunity to sit down with our new partner, Director of Rugby at Leeds Rhinos, Kevin Sinfield. We asked Kevin about the value of loyalty; whether this trait was vital to his success with Leeds Rhinos and what his understanding of loyalty looks like.

Kevin has famously only ever enjoyed his Rugby League playing career at Leeds Rhinos. He was a Rhino for 19 years, having been made captain at 23. He talks to us about the beginning with Leeds Rhinos, his relationship with his teammates and the unwritten characteristics needed to stay united. We go on to explore how loyalty drives the success of both Kevin Sinfield and Romero Insurance Brokers. 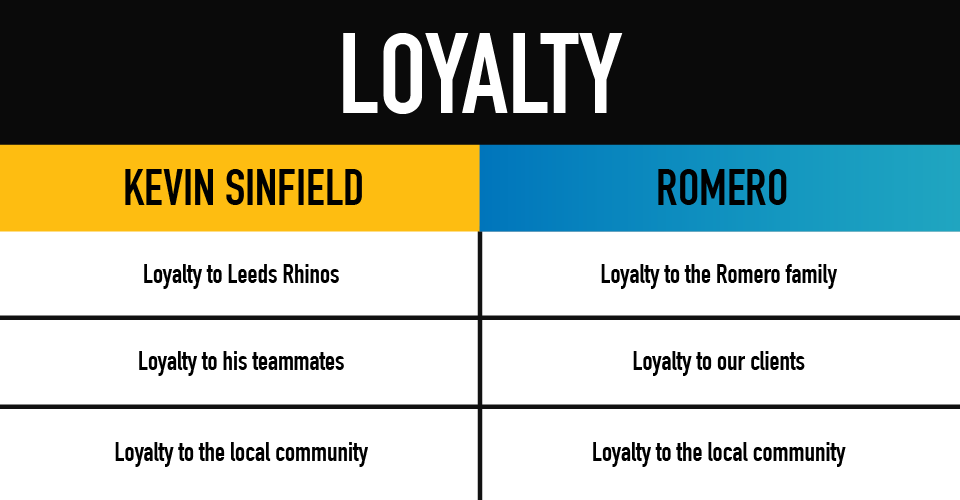 Loyalty plays a large part in teamwork and successful team leadership. Kevin draws on his experience of the make-up of a good team:

“I’ve always had the thought process that a team needs a different character and a different personality type. Sometimes you can have too much of one or not enough of one, a bit like your vitamins that we all need. But I’d say our squad and our staff and the people who work here (Headingley), it has always been about being good people first.”

For Kevin, trust and teamwork strongly correlates to integrity and being a good person. Diversity also plays a role, as Kevin explains a good team needs a mix of characters. At Romero Insurance Brokers we pride ourselves on the diversity of characters in our offices. We too believe a mix of people creates the best environment, beneficial for both work-ethic and attitude. Our family of ‘good people’ at Romero makes the office a good place to be and a great place to work. This ethic and sense of community filters into our work and is recognised by our clients.

Kevin talks about his understanding of being a good person and how that played a role in his journey with Leeds Rhinos. On the expectations and standards, he says:

“We all have our own understanding of what that looks like. I would say there was a uniformity in trust, in respect, in honesty, in turning up and working hard everyday – on the field when the bullets are firing and off the field aswell.”

Kevin here lists a range of attributes which link to loyalty. Trust, honesty, respect and hard work. At Romero we treasure these traits and expect them from our staff. We also show loyalty to our clients by demonstrating these traits. We trust in their judgement. We are honest with them in regards to their policy and needs. We respect their decision, and we work hard to get them the cover they deserve. Each of the traits Kevin has picked out define what it means to be a good insurance broker.

When quizzed on his prolonged stay at the Rhinos, Kevin responded by discussing his relationship with his teammates:

“I was happy. The players I played alongside were friends. Not only teammates or people you go to work with, but I really enjoyed the company. I probably spent more time with the players than I did my own family… It was all about being happy. We were very fortunate as we had a group who were all very similar-minded.”

Kevin understands his relationship with his teammates and friends was critical to his stay at Rhinos. At Romero, we understand that 8 hours a day, five days a week is a lot of time to spend with colleagues. We try to keep our staff happy, which in turn translates to our clients being happy. It’s also the singular-mindset, as mentioned by Kevin, to perform and do our best in our role, which keeps the environment productive and the business moving forward. Kevin later mentions it’s these friendships and loyalty built-up over time that ultimately brings success.

Kevin brings up his 7 in 7, his amazing accomplishment of running 7 marathons in 7 days. His effect helped smash the target of £77,777, having raised £2.7 million for the MND association and the community.

“The satisfaction I got from running the 7 in 7, it’s the best thing I’ve done in my life… Some of that comes down to helping a mate, which is where it started, helping the MDN community raising awareness and funds that are much needed. But probably in its simplest form, providing some hope for a lot of who’ve done it tough this year.”

Loyalty to the local community comes in many forms, but inspiring people to give money for a charitable cause is a perhaps the clearest. Kevin is a great advocate for charitable giving. Also, Leeds Rhinos is a club which has a strong ethos to give back to the local community. As an insurance broker, Romero aims to support and benefit clients in any way. Our motto is ‘Treat our customers exceptionally’ as we always put the needs of the client first. Romero also places and emphasis on community and looking outwards, having donated £and also £7000 to Kevin’s 7 in 7. We are a national business but we are very in touch with our Yorkshire roots, supporting Yorkshire businesses wherever we can.

To give toward Kevin’s efforts, see the 7 in 7 fundraising page here at https://bit.ly/Kev7in7.

The Spirit of The Rhino

Kevin finishes his dialogue on loyalty by explaining the spirit of the Rhino:

“There is a spirit here. That is an army of past players who have worn the shirt, an army of supporters who over a hundred and odd years have stood on the terraces, an army of sponsors, an army of staff who stand behind you every time you take the field. There are certainly some traits in there that I think the club stand for: Having humility, working hard and putting the team first are certainly three that come to mind.”

Kevin perfectly sums up the consequence of loyalty and the feelings that accompany it. Loyalty results in knowing your teammates and colleagues are behind you, knowing staff are there to support you, knowing you are fully prepared to go and work for your local community and clients. This feeling Kevin dubs “the spirit of the rhino.” It relies on the values of humility, hard work and putting others first. One of the reasons we partnered with Kevin is because we understand the spirit of the rhino and we are overjoyed to have the Rhino at Romero.

Looking for a broker with loyalty?

We built our relationship with Kevin because or values align so closely. To find out how, get in touch using the details below:

0113 281 8110
enquiry@romeroinsurance.co.uk
Back To All News
Next Story: Can companies force employees to get vaccinated?
Previous Story: The Rhino at Romero